Vizlib Team
started a topic over 1 year ago

We reduced number of clicks developer had to make in order to add existing data columns to the table. Column type is going to be automatically determined by field metadata. Applies to fields, dimensions and measures. Column type can be later change through the property panel if desired.

- [CLB-1574]: Option to hide warning when destination file and writeback data formats do not match

Vizlib Writeback Table is capable of analyzing output file format and it analyze if format of the columns matches. In case of any differences warning message will be displayed. In some cases, mainly involving insert and update operations, Vizlib Writeback Table structure can change over time, but file can still contain additional columns. In those cases warning would be displayed on every writeback. That is we we have added checkbox to hide the warning if it's not desired. This decision has to be made by qlik sense developer while setting up the sheet as it's stored within extension properties. 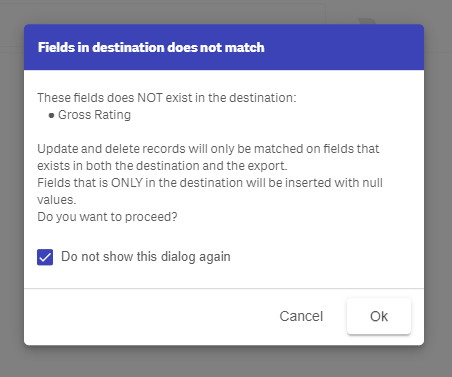 There were few cases where the update operation was not working as expected and numerous improvements have been introduced. Those improvements include support for cases when:

* columns are removed or renamed from Vizlib Writeback Table

Few table cells components were throwing errors when range selection has been pasted from the Excel file including Chips and Dropdown.

There was an issue with validation of duplicated rows which was not being removed in some cases.

Exception was thrown in some cases when component type was changed to multiple choice.

Validation has been added to that field inside property panel so that the table is not affected and does not break anymore.