We can now change the entire URL rather than just the later part of it.

For custom data sets it is possible to set the totals function to different options including turning it off (none). For table data sets this information is still inherited from the table so no changes to that. 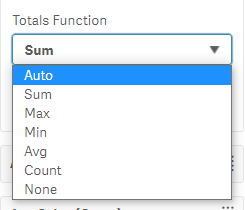 We accidentally lost the ability to sort groups. Fixed now.

- [VSS-1500]: Order of columns in the table isn't synchronized when it's arranged by dragging the column header

Some want to sort in the table. Some in Analytic Search. It is now all in sync regardless of your prerogative.

Later versions of Qlik Sense have a different way to handle number formats. We are now aligned also for those versions.

Pressing the button to save the first state should give a button to show default state. This now works in all versions.

- [VSS-1180]: Changing sort order in data set is not reflected in visualization

- [VSS-1465]: Trellis: Watermark and Title is displayed over left menu

Watermarks and titles in Trellis/Grid mode did not work well with having the left hand menu float over the visualization. This is now fixed!