- [CLB-2987]: [Writeback Table & Input Form] Conditional Formatting.
We already had plenty of formatting options but now it is also possible to set up rules for the formatting using expressions. Define one or many rules that will dynamically adjust the chosen formatting options of either individual cells or entire rows.

- [CLB-3036]: [Writeback Table] Soft delete for the insert operation.
New setting which allows you to define a column by which rows should be marked as deleted, but not actually removed from the data destination. It's available for the insert writeback destinations. 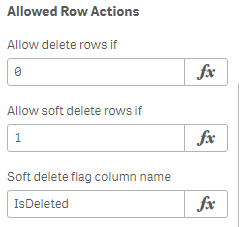 Property panel showing new 'Allow soft delete rows if' and 'Soft delete flag column name'. Column name is the exported column name that will be exported with a 1 if user soft delete the row. The logic for removing rows should be added in load script.

While working with bigger tables its easy to loose track of changes. To solve that we have introduced this indicator/badge that shows how many rows will be added, edited or deleted in the table. One number is shown as soon as any rows are touched. Hover over the badge to get the details in a pop-up.

- [CLB-2897]: [Writeback Table] Warn if column have too high precision and would cause duplicate records

When working with data containing numeric cells with high precision, there is a risk that Qlik Sense will trim those values which in the consequence can lead to data mismatch upon performing writeback operation, as rows cannot be matched properly. In order to help users identify such scenarios, Writeback Table will now display warning message when a value with high precision will be loaded.

- [CLB-2986]: [Writeback Table] Validation fixes
There were cases in which some columns could contain an invalid value, but the writeback button would still be enabled.

Defining invalid regex could break the extension and prevent it from rendering properly.

The combination of these two settings did not work properly. The way it works after this fix is that edited cells odd/even color will be removed (so all edited rows in the striped table will have the same background color - “Edited Cell Color”).

Really long input forms would be slower than they needed to be and should now be a lot faster.

The Vizlib Writeback Table Object did not work with QlikSense Single API if the Reload Action setting was either Reload App or Partial App Reload.