In the Writeback Settings section of the Vizlib Management Console (VMC), the Loop & Reduce Tasks settings use loop values to break down large applications (apps) into smaller ones (reduced apps). This guide takes you through an example of how to create and execute a loop and reduce task.

Loop & Reduce Tasks allows you to split a large app into reduced apps based on loop values. Once

the reduced apps are created, you can create security rules to make sure users only have permission to see the data they should. I.e. each app is split to contain only the data they can access. As a feature, it is a good complement to section access in Vizlib Writeback and can be used to deliver several benefits.

The examples in this article use qvd-files for simplicity but of course any of the available data sources can be used.

There are important things to consider when using Loop & Reduce Tasks. (If you have previously used QlikView Loop and Reduce this is similar but there are key differences).

These features and differences are designed to give app developers more flexibility in developing and organizing access to specific features and improving app performance.

Updating the design of reduced applications

When changes are made to the design of the application they only need to be implemented in one place and then changes are propagated to the reduced apps.

Follow these steps to deploy updates to the reduced apps.

Figure 2: Deploying changes. (Note how version number changes in the reduced apps based on the updated source app.)

A video guide to setting up binary loads is found here.

Figure 3: Nightly reloads of the reduced apps. Quick binary update of the larger data volumes and then the (typically smaller) data from each writeback is added.

When writeback is executed the reduced app where the writeback was initiated will be reloaded quickly with the source data from the Binary data source and the updated writeback data from the loop value qvd (Figure 4). This can be achieved with by configuring the destination used by the apps with dynamic tags for reload app and filename. See Destination section for more information .

Figure 4: Reload after Writeback of Green.qvd.

Before you start, there are a few tasks you'll need to complete, we've listed them here for you.

To start working with Loop & Reduce Tasks, you'll need to log in to the VMC.

Note: If you see the

icon, click or hover to see more information about the feature or field. 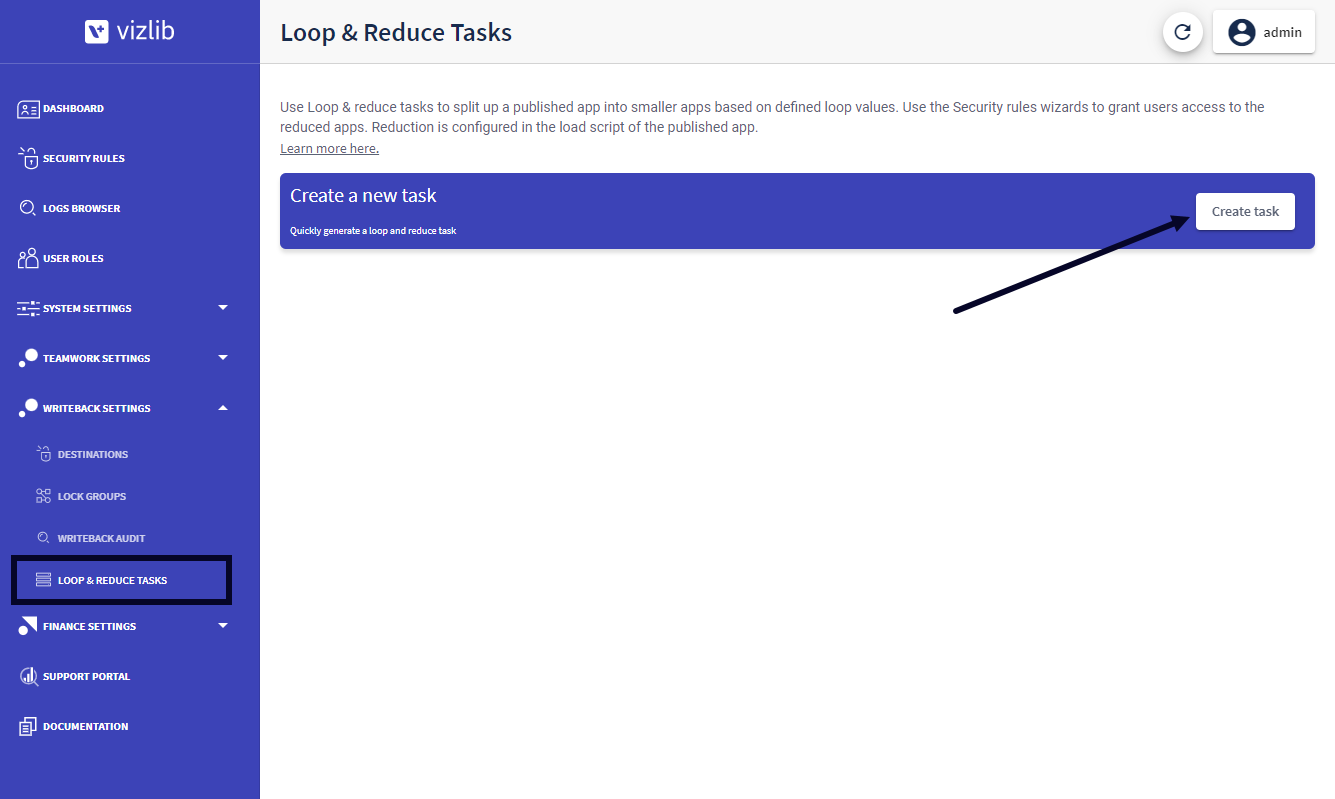 When the Create Loop and Reduce Task screen opens (Figure 6) you'll see several empty fields where you'll need to enter information. You can complete the form by following the steps in the numbered list. 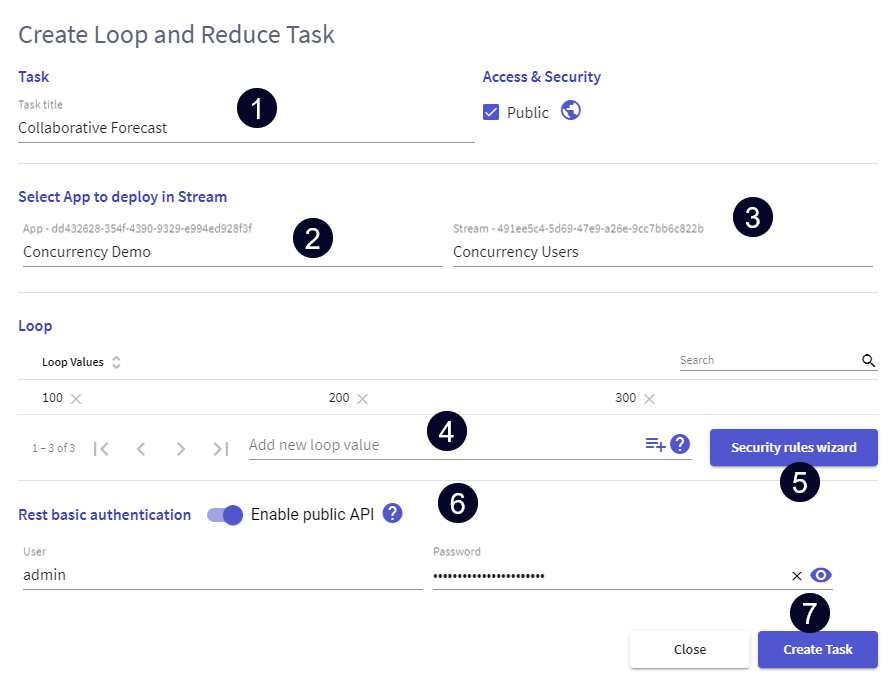 Important: Modifying security rules can grant users permissions and access to data which they should not have. Always remember to verify any changes to a security rule in the Audit window of the QMC!

When the Security rules wizard screen opens (Figure 7) you'll be able to configure and modify security rules which grant access to the reduced apps.

Note: You'll need to be logged into the QMC for this section. 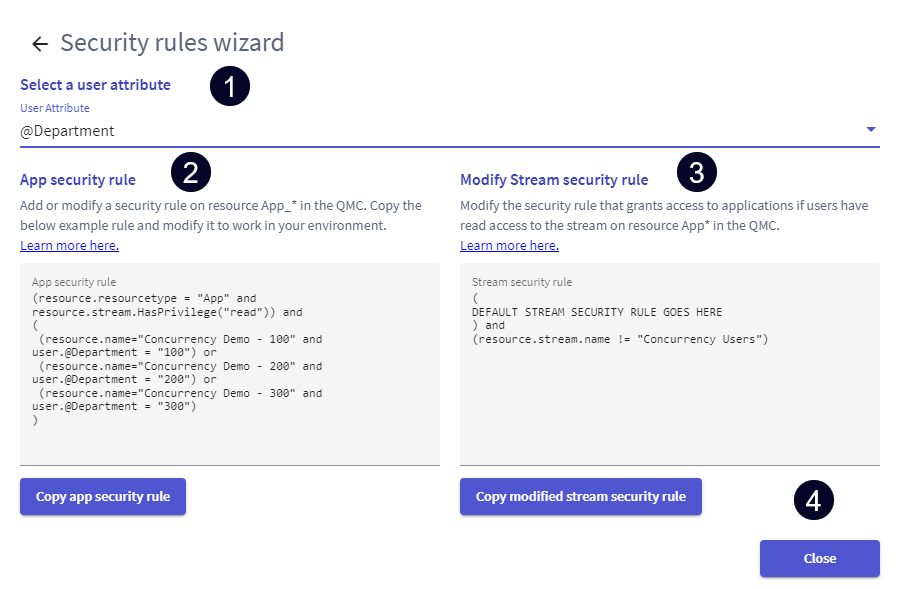 1. In Select a User Attribute, select the User attribute you need to determine access to the app (e.g. Department or Group). The attribute value must be equal to the loop value. If you can't find a suitable attribute in your user directory, you can create a new custom property in the QMC. 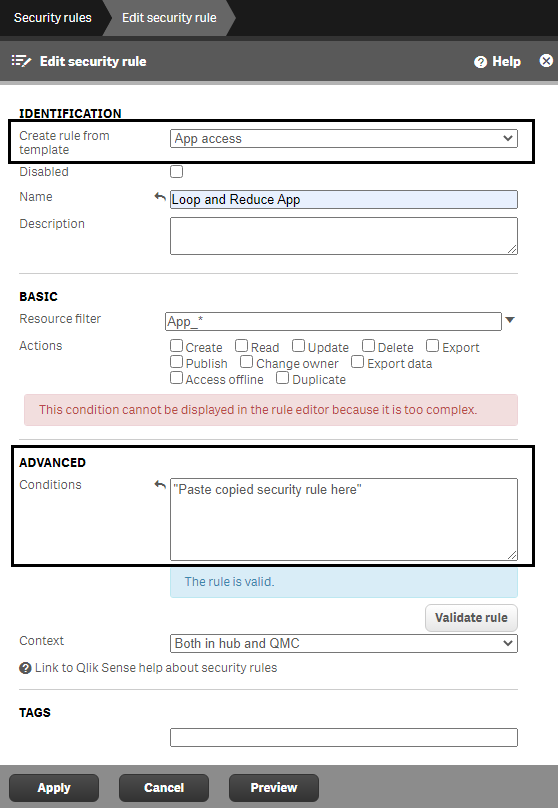 3. The QMC default app access rule grants all users read access to all apps in every stream. For loop and reduce tasks, the rule must be modified to exclude the stream for the end-users reduced apps, and for that you can use Modify Stream security rule.

Note: If you are not using the default app access rule you need to edit your security rules manually.

Once the task has been created and saved, you'll be able to manage it in the VMC (Figure 9). When you click on the task, you'll see a range of options appear - Execute task, Edit, Duplicate, Delete and Transfer Ownership. 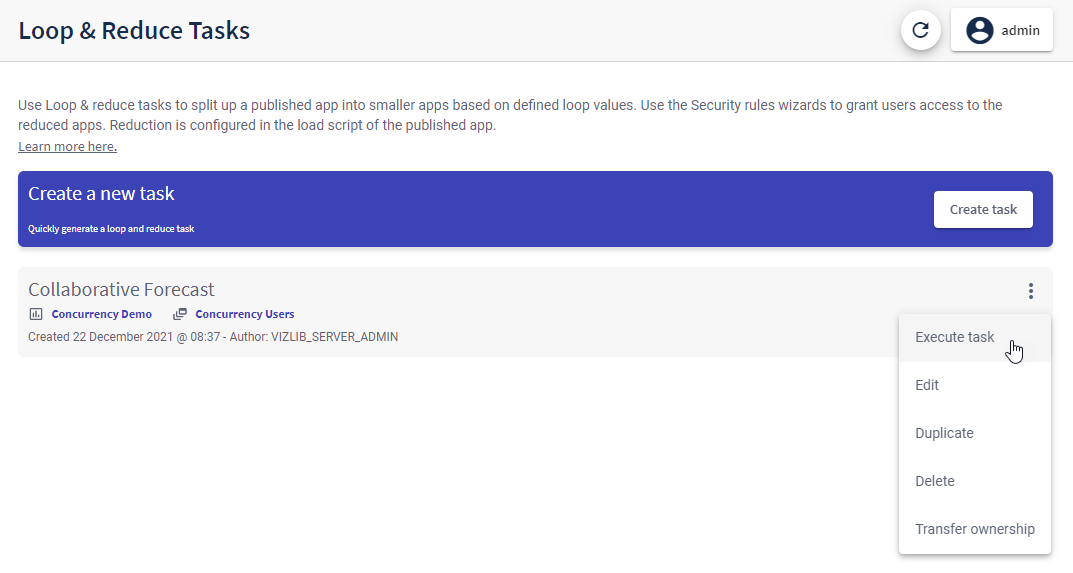 When you click Execute task, you'll receive status updates on the task's progress before receiving a confirmation that the task has been successfully completed (Figure 10).

Both these applications should be published to a stream (e.g. Concurrency - Binary & Dev) and then a separate stream (e.g. Concurrency Users) should be created for the end-users where the reduced apps are published. Figure 11 shows an example reduced app, where you can see the loop value 100 displayed as the suffix after the loop and reduce task have executed successfully. 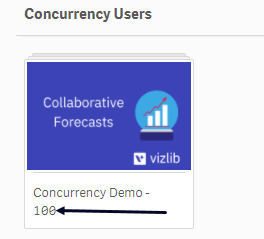 This section contains examples of the data load scripts which need to be used with the demo apps.

The load script for Concurrency Demo.qvf starts with a Binary load of the source data (Figure 12). Create a new data connection with the name Concurrency BINARY that points to the BINARY - Vizlib Collaborative Forecasts.qvf (you can find out more about how to set up binary loads here).

Create a folder data connection with the name ConcurrencyData where the demo app will store and load its data. QVD files and folders will be created on reload of the demo apps.

NOTE! If you want to use a data connection with a different name, you need to update the DataConnectionName variable in the README section of both applications (Figure 13).

The reduction of data is configured in the load script of the source application (Concurrency Demo.qvf) and reduces/filter the data model when the reduced apps are reload. In the demo apps we use the app suffix (loop value) and filter the binary data on the Cost Center field. The FilterDataOnGroup sub-routine filters the Transactions and CostCenters tables based on the _Group equal to Cost Center field (Figure 14). 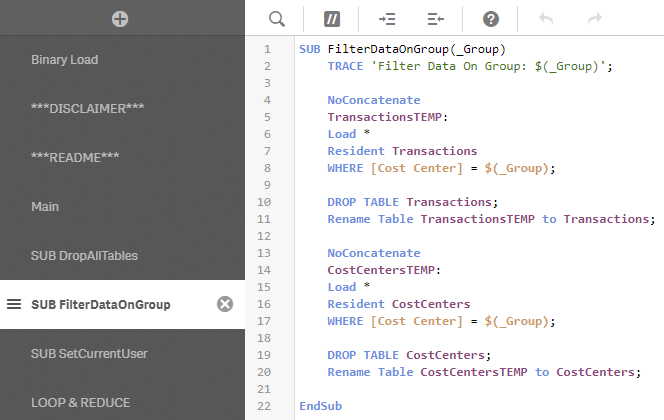 The Set Group Variable section (Figure 15) contains logic on how to extract the loop value from the Document Title.

The LOOP & REDUCE section (Figure 16) contains logic to verify the document name and loop values. If they are not correct or a value is not defined according to the If statement, all the data tables will be dropped. If the loop value is valid then the FilterDataOnGroup subroutine is called with the loop value as an argument. 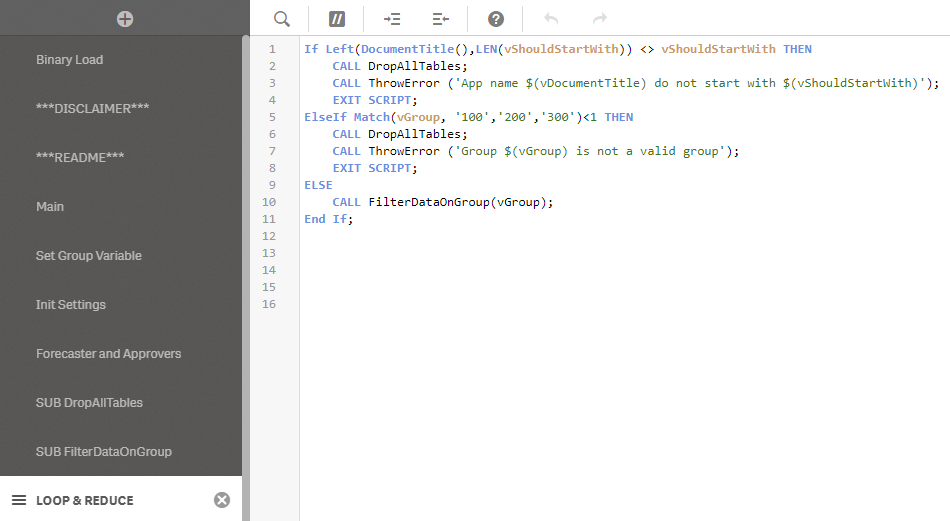 Create a new Writeback Destination in the VMC and fill it out as Figure 17. 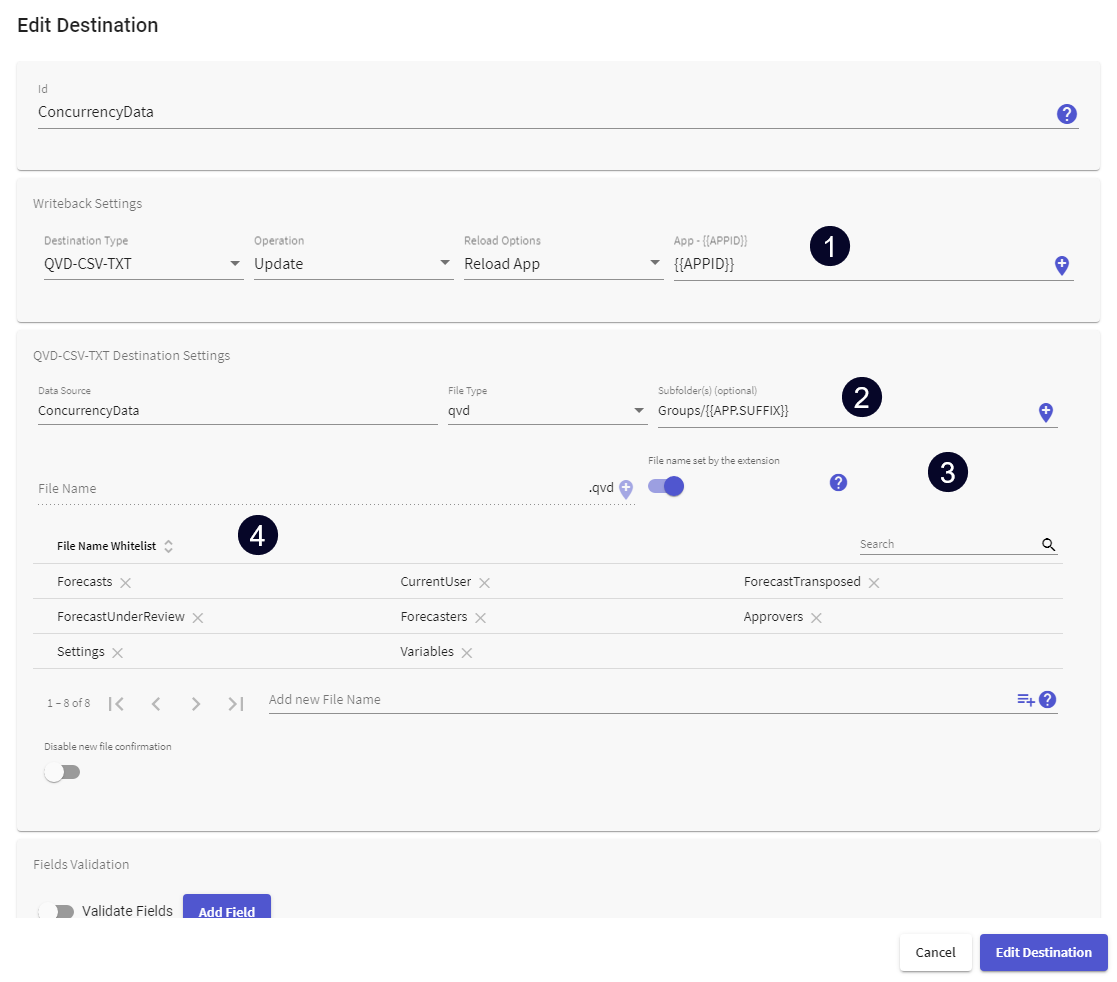 Note: If you want to use a destination with a different id, you need to update the VizlibServerDestination variable in the README section of Concurrency Demo.qvf (Figure 18 & 19)

To continue configuring the demo apps, create a new Loop & Reduce task following the steps here Creating a Task and execute it to create the reduced apps.